Players’ experiences and the impact on retention rates

The aim of this research was to determine the extent to which a player’s (N = 2310) decision (retention motivations1) to not return to RL in 2017, was influenced by four main experiences, being: coaching, playing, club and socialisation. A mixed methods (quantitative and qualitative) approach was employed to investigate possible associations. Findings from this study provides a comprehensive ‘snapshot’ of the current RL landscape, linking Junior (n = 1804) and Senior (n = 506) players’ experiences (2016) to retention rates (2017). A summary of results and potential recommendations are presented in this report, with the aim to draw attention to some of the more important patterns of associations between the four measurable experiences (coaching, playing, club and socialisation) and players’ retention motivations.

It was further identified, that participants (N = 2310) agreed most strongly on two main negative experiences, these being, ‘player selection not fair’ (21%, n = 485 / 2310) and felt as if their ‘contribution was not valued’ (17%, n = 393 / 2310). Significantly2, players across both groups, were mostly similar in their responses concerning these two and other identified retention motivations. In particular, the analyses reported that the Junior and Senior groups did not differ appreciably between regions (NSWRL, NSWCRL, QRL) concerning these retention motivations. However, slight differences did exist between governing bodies, where NSWRL (Juniors) and NSWCRL (Seniors) were noted as being more critical (negative) about their overall experiences.

There were a number of noted patterns of differences between groups associated with experiences which influenced players’ decisions. Of importance, was the variance between groups concerning the item related to ‘level of competitiveness was too high’, with Junior RL players identifying a significantly higher negative response rate compared to that of Senior RL players. Another significant pattern of difference, found to exist between groups, was associated with Juniors, males and participants with more years of RL player experience, being that they were overall more critical (higher negative agreement levels) of the game when compared to others. There were also further differences that presented themselves, associated with Junior versus Senior negative experiences, associated with ‘fun and enjoyment’ (Junior) and ‘limited support’ (Senior).Such a pattern of responses would seem plausible, given the context of each group’s intrinsic and extrinsic motivational needs.

Reoccurring themes from across the qualitative (player commentaries) data sets were associated strongly with favouritism (discouragement), weight difference (fear and injury) and injury (retirement). Interestingly, the thematic patterning from the qualitative data went to re-enforce (mirror) the quantitative data uniformity across groups.

From such findings, it is possible to discern patterns of associations between specific items related to the four experiences (coaching, playing, club, and socialisation).

A summary of main findings, can be identified as being:

A high degree of positive agreement associated with:

A high degree of negative agreement associated with:

A high degree of agreement associated with:

Similarities and differences between groups (Junior versus Senior), concerning the top three main reasons (from 12 categories) which influenced their decision to not return in 2017 are presented as being are shown in Table 1.1, Table 1.2 and Table 1.3.

Similarities and differences between groups (Junior versus Senior), concerning the top three main negative experiences which influenced their decision to not return in 2017 are presented as in the following:

To a large extent, this report and its findings are supported by the identified theoretical basis of claims, ascertaining that a player’s decision to not return to play RL (2017) is largely influenced and based on such retention motivations as fairness, social interaction, fun, being valued, a sense of belonging and differing intrinsic and extrinsic motivations. Based on these findings, it would be reasonable to suggest that RL needs to invest in a more concentrated effort around aspects of the game, that are more focused on social engagement and cater to individual motivations (especially in Junior groups), rather than solely aimed at ensuring high level of competition and game results. The latter approach will not encourage or sustain player retention at the grassroots, nor, given the increased competitive market, ensure future player recruitment and growth into the 21st century.

It is envisaged, that the findings from this report, will provide a valuable ‘foothold’ into the world of the RL player and as such, promote the future design and implementation of strategies aimed at addressing retention motivations in RL. This report presents findings from individual groups (Junior and Senior), combined (Junior and Senior) and individual governing bodies (i.e., NSWRL, NSWCRL, QRL and Affiliated States). Such a thorough approach has provided a burden of evidence, concerning elements of the RL culture, which impact and influence player retention motivations. It is also important to note, that whilst there are a number of immediate strategies RL can commence with to address retention motivations, there are certain facets of the game and data findings that will be out of the control and reach of the sport (i.e., individual player transitional life phases—relocations, heightened and fluctuating study, work and family commitments). Subsequently, from the findings, this report provides eleven recommendations that the NRL may give consideration to, in an attempt to address the identified areas of concern.

For further detail, click here to download the full 2017 Retention Study conducted by the NRL and Griffith University 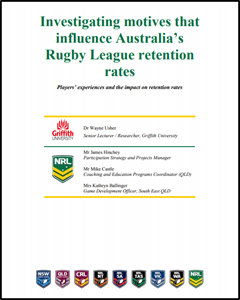